Efforts to manage beaches, rivers and lakes of the aquatic weed growth (such as water hyacinth, sea grass and marine algae) done in various ways, and one of them with the harvest, and to make biogas energy, fuel stoves and even fuel for the generator set.

Biomass Water hyacinth has another name 'Eichornia crassipes' is a kind of floating aquatic plants that live on the surface of the water. These plants grow rapidly when filled with agricultural waste or plant so that it becomes an indicator or where in the already polluted river (the sewage polluters). Water hyacinth hidrofi a plant, this plant is not edible weeds even a nuisance plants to other plants and animals around it. These plants and water plants generally like seaweed and various other types of aquatic weeds, contain cellulose in large quantities. And cellulose that can be used as fuel by generating biomethan (pure biogas) for thermal energy (stove) and electric energy from the generator sets as well as by-products such as organic fertilizer.

Technological developments such as the fermentation of biomass waste, weeds and trash into a new material that provides economic benefits, has spawned business opportunities electric energy generation and organic fertilizer production in multi-scale. PLTBM technology developed by PT. Cipta Visi Sinar Kencana (CVSK), and since 2011 has been tested in 33 locations PLTBM models, for example, can be done from the smallest scale of 150 kg / day of biomass (waste, sewage and weeds) to the large-scale of hundreds of tons / day.

Business and investment opportunities of new renewable energy generation (specially made ​​from waste and biomass), since the year 2012 is also supported by the government started to provide incentives in the form of premiums, exceed the purchase price of electricity from fossil energy generation. Purchase price by the state electricity company (PLN Persero PT) on electric power generated project sponsors / investors (governments provincial / district / city, private, cooperative and public) is always greater than the power of conventional generation (fossil material).

According to the Minister of Energy and Mineral Resources (ESDM), the government will revise the rules and raise the purchase price of electricity from new power generation (biomass) to Rp 1.250 to Rp 1.450 per Kwh. PLN is obliged to absorb electricity. It has been public consultation and discuss with PLN, he said recently. Electricity generation comes from renewable energy is still minimal. Of the total installed capacity of 44,124 MW in 2012, generating capacity based biodiesel, biogas, biomass, and municipal waste is only 0.12%.

Based on the experience in the last 2 years with the establishment of a model at 33 locations (small-scale output up to 25 KVA), it can be analyzed that the magnification scale biomass processing operations (trash, weeds and waste) gives better profit parameters. Converting energy from water weeds are shown in the table PLTBM Scale for raw chart form below 250 tonnes of water hyacinth. 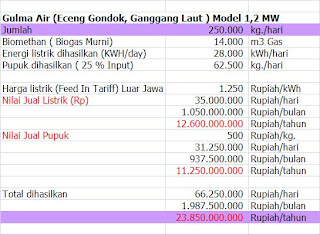 The fermentation process 250 tons / day of water weeds in digesters PLTBM reactor, will produce 14,000 m3 biomethan (pure biogas methane composition> 80%). Much gas per day, to fuel generators that have high compression, will be as many as 28,000 KWH of energy. Or, if used as thermal energy (material stove) would equal 6720 kg LPG or equal to 560 units of 12 kg LPG cylinder.

In addition to the above energy recovery, fermentation technology (Solid Fermentation Biomethan) in the installation of Biomass Power Plant (PLTBM), in contrast to the generation of new energy and electricity from other sources (Solar Cells, Hydro Power Plants, and biomass gasification technology that only produces one type of output, power). In fermentation technology in Biomass Power Plant, in addition to energy, there is the acquisition of organic fertilizers - are rich in compounds and hormones. In the case of 250 tons of biomass water weeds (water hyacinth), will produce at least 62.5 tonnes / day or Rp. 1.9875 billion / year.

With both output products (electric energy ~ thermal energy) as well as organic fertilizer, weed every 250 tons of water, to measure the electric energy acquisition and organic fertilizer from biomass (aquatic weeds), based on the experience Notices Vision PT Sinar Kencana in 33 locations mentioned above, will result in revenue of Rp. 23.85 billion, - / year.

Acquisition of electrical energy and organic fertilizer from biomass (aquatic weeds) as above is actually able to attract the attention of the organizers of the provincial government and district / city that has a problem with the water area and water weeds, and, given the attractiveness to the project sponsor / investor (sources of funds CSR, Bank) to change weeds into energy and fertilizer for the benefit of society (Sonson Garsoni *)