Trends in consumption in the number of conventional fuel (premium, diesel) will increase continues. Fuels derived from petroleum are fossil energy sources that can not be updated (unrenewable), while demand continues to rise, so also the price because there is no stability in supply and demand balance. One way to conserve fuel oil (BBM) is looking for renewable energy sources (renewable), such as biogas. Biogas is the result of anaerobic decomposition of organic material, mostly composed of methane (CH4), carbon dioxide(CO2) and some other gases. 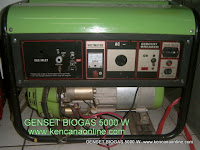 Methane (CH4) formed by the fermentation process is anaerobic (without air) by methane bacteria also called biogas, anaerobic bacteria and bacteria that reduce the waste that contains organic material (biomass) to form methane (CH4), which when burned to generate energy heat. Methane gas with liquefied petroleum gas ( liquidified petroleum gas / LPG), the difference is that methane has a C atom, whereas more LPG.

Biogas as a result of a process of fermentation of different organic materials (all materials derived from living things) is a renewable energy source (renuwable energy) that can be obtained at minimal cost. The gas formed in the tube-tight (without oxygen) Biogas Digester BD 5000L, wich strong made ​​of resin eternally 2504, this type of mat Wr 200 (woven mat) and mat 300 (random), the thickness of 3-5 mm, able to ferment 5 m3 percycle . Trash and other organic materials can be continuously added to the entry holes (intake chamber) and will be parsed by anaerobic bacteria Green Phoskko (GP-7), only 5 days have started to releasemethane gas (CH4) and stored at the top of the tube (gas holder).

5 m3 capacity of material inputs ( organic material) with 2 m3 of gas holders or the overall capacity of 7 m3 and a dimensions (diameter 200 cm, height 390 cm), will persist until more than 5 years. Produced by complete knock down, complete with the installation of gas pipes, stove manufacturer standards and supporting equipment for the utilization of methane gas as an environmentally friendly fuel. 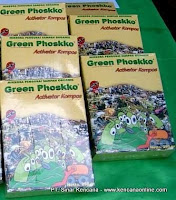 By placing organic waste separately, and then resurrected in a methane gas digester airtight, with anaerobicbacteria such as Green Phoskko (GP-7), then the gas (CO2 and CH4) is produced can be accommodated in a gas holder at the top of the digester. By flowed into the inlet bioelektrik genset (generator biogas), the gas will be converted into electrical energy, and the remaining end of the process, the sludge remaining after digestion (slurry) into a good compost for plants. The organic waste is extremely beneficial to humans (the lighting, the driving engine and electric power for home furnishings), along with the rest of the process into fertilizer and fertilizer plants and agricultural land. 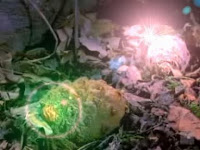 Unfortunately, in developing countries generally, until now the category of organic waste (from the central market, the remaining dishes and food at the Food Beverages Hotel and Restaurant, human feces in septic tanks, livestock manure, residential garbage, trash wholesale market, often without the management good. So not giving a blessing as electricity (bioelektrik) as well as organic fertilizer, but, instead, be caused to the worsening problem of environmental sanitation and, in fact, every time a disaster is lurking. Therefore, the presence of biogas digester and generator sets are complete knock down (CKD) is expected to harvest more and more parties to conduct electricity (bioelektrik) and organic fertilizer from waste materials and organic waste . harvest biogas, electricity and organic fertilizer from organic waste and garbage is no longer an impossibility. Bio-electric technology has answered the challenge to everyone to come save the earth. Now it's time to harvest the benefits of waste and organic waste*)
Diposkan oleh Sonson Garsoni di 5:47 PM

Email ThisBlogThis!Share to TwitterShare to FacebookShare to Pinterest
Label: By generating Biogas, electricity and organic fertilizer harvesting from organic waste